The summer has flown by in a whirlwind, and it's nearly at an end. My contract with Theatre Ancaster went well, and kept me very busy planning classes and casting and directing. Lovely. Events conspired, however, to slow me down, and I hit a pretty serious slump at the end of June, which was followed up by the chaos that is TA's Stage 2.
I return to you now, with the colours of fall creeping into the summer palette (I biked through a shallow drift of red maple leaves today), to update you on significant sketches that took place over this absence from the interwebs.
These sketches were done over the course of my summer holiday in mid-August. First are some airport sketches, followed by some members of the jazzy band that played up in the lounge on the ship, and the last is the room my brother and I stayed in on board. Still playing with trying to capture moments. 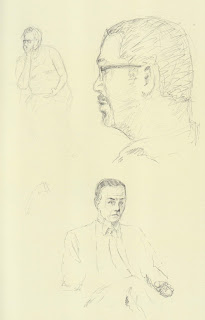 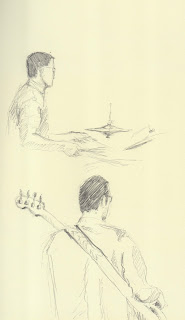 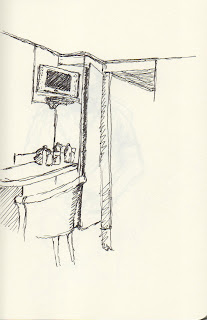 More sketches from on board. I'm particularly happy with the simplicity in the island. I want to try to pare down some of my images to the least possible number of elements. 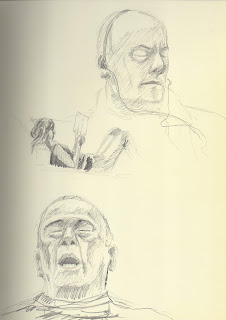 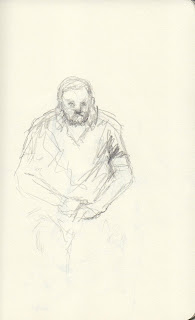 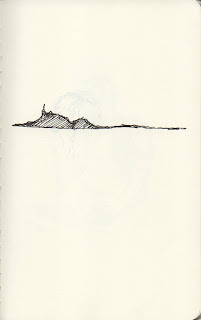 Until next time. I plan on making sure that another eight weeks do not go before I update again.

Posted by Alex Thompson at 3:10 PM

Who is This Mysterious Character?

Alex Thompson
My name is Alex R.M. Thompson, and I'm a graduate of OCAD U's Printmaking program. Browse around, and also check out my website at www.alexrmthompson.com. All images © Alex Thompson 2009-2013